The result of the Redeemer's work, the blessings to the
redeemed are shown by the second book.

The constellations in the second book include:

Living Waters of Blessing Poured Forth for the Redeemed 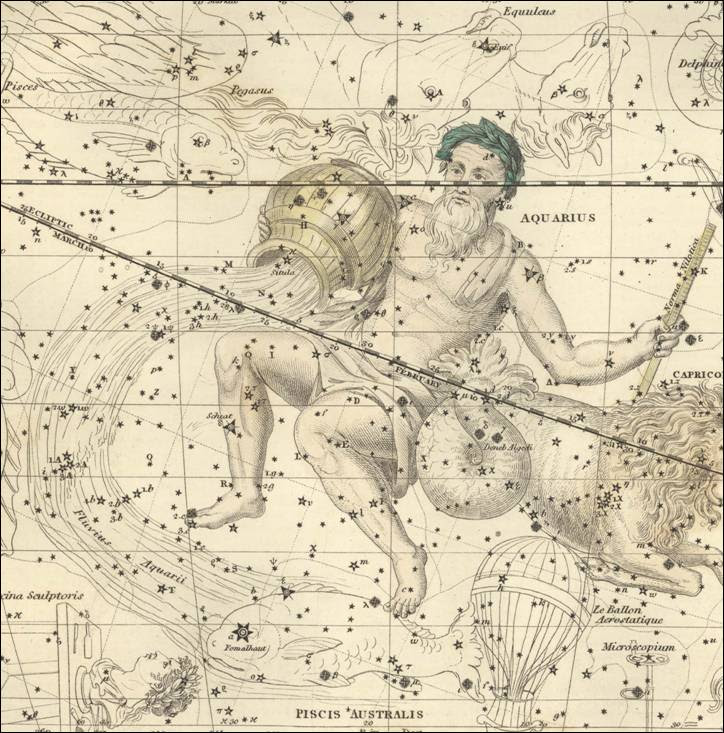 In the First Book, we had the work of the Redeemer set
forth as it concerned His own glorious person. The second chapter in the Book of The Redeemed is Aquarius.

The Sun passes through Aquarius from mid-February to mid-March. Aquarius is best seen in the fall and is situated between the zodiac constellations of Pisces and Capricornus.

Here is a man with a great Urn in his right arm, pouring out waters
from the heavens and the Southern fish is swimming in the stream. Aquarius is named GU.LA "The Great One" or "Giant" in the Babylonian star catalogs and represents the god Ea.

In ancient Greece, Aquarius is identified with a man and his wife known as Deucalion and Pyrrha. According to the myth, Aquarius caused a great flood to wash over Earth. Deucalion's father advised his son and wife to build a great boat and stock it with provisions. They did and the two floated in the world-sea for nine days and nine nights. Eventually the boat ran aground on Mount Parnassus.

In Egyptian mythology, he is associated with Hapi, the god of the Nile, and pours water into the Nile River at the season when the Nile normally overflows its banks, this brings the much needed water to the farmlands bordering that great river.

In modern times, this constellation was immortalized by the counterculture of the 1960's, which proclaimed the Age of Aquarius. This was a bit premature as the Aquarian age will not actually begin for another 600 years. As astrological age is identified by the name of the constellation in which the vernal equinox (the position of the Sun on the first day of spring, March 21, is located. This location moves slowly from one zodiac constellation to the next as a results of Earth's procession. Each age is approximately 2200 years long.

Aquarius is a symbol of the giving of the Holy Spirit to God's people.
Aquarius shows a man pouring water from
an urn into the mouth of a fish. The water represents the Holy Spirit
(represented in Scripture as water or wind) and the fish represents God's
people. As Christ died and
poured out living waters that we may live, so is Aquarius. The Holy Spirit was given at Pentecost fifty days after the resurrection
of Jesus. This pouring of the Holy Spirit is referenced in Isaiah 44:3
" For I will pour out water to quench your thirst and to irrigate your parched fields. And I will pour out my Spirit on your descendants, and my blessing on your children. They will thrive like watered grass, like willows on a riverbank."


Names of some of the stars:


The three decans are PISCIS AUSTRALIS, PEGASUS
and CYGNUS

I. PISCIS AUSTRALIS (The Southern Fish) - The blessings received.

The first decan is the Southern Fish (Piscis Austrinis). It is simply
a large fish, which receives the water poured out by the Waterman. Sometimes
the water is shown entering the mouth of the fish. The fish is a symbol
of Christianity, or at least of the Lord's followers, even as the Lord
called his "fishers of men." Thus, the water being poured onto
the fish appears to represent blessings and knowledge being poured out
on the heads of the followers of Christ as they drink of His living waters. It sets forth the simple truth that the blessings procured by the coming Seed of the woman, will be surely bestowed and received by those for whom they are intended.

The second decan
is a winged horse, Pegasus, The Soon Return of the Redeemer. Pega means "Chief" and Sus means
"Swiftly Coming". This constellation is known by the asterism "the Great Square" seen in autumn skies virtually straight overhead in late October about 9:00 PM. The four predominant stars in Pegasus is a fairly bright square about 15 degrees in width that you should have no trouble seeing.

The stars in this constellation include:

In Greek mythology, Pegasus was the famous steed which sprang forth from the blood of the Medusa after Perseus had decapitated her. Pegasus was said to have lived on Mt. Helicon where he stamped his foot and water issued forth from the ground. Here again, even in these man-made stories, we see a kernel of truth that survived because a river of life DOES spring from the ROCK (Jesus Christ) who, when struck on the cross, issued forth life.

From the stars, we see the message
that the Branch (Jesus) is swiftly returning from afar. This message is
also given in Revelation 22:20: "Surely I come quickly". (KJV) These names show us that this is no ordinary horse. A winged horse is unknown to nature. It must therefore be used as a figure; and it can be a figure only of a person, even of Him who is "the Branch," as the star Enif shows, who said, "If I go away I will come again," as the star Scheat testifies.

So the message now is "He who procured these blessings for the redeemed by His Atonement, is quickly coming to bring them; and is soon returning to pour them forth upon a groaning creation."

The third decan is the Swan (Cygnus). This constellation is also known by the asterism "the Northern Cross" it looks more like a cross than a swan. The picture is of a swift flying swan descending to earth. The Christian interpreters have mostly associated the
Swan with the swift return of the Savior (the one who blesses) at the
Second Coming. Thus both the Swan and the Flying Horse are seen as variations
on the same theme. Cygnus tells us of the swift return of the Messiah & Judge.

It was called by the
Egyptians in the zodiac of Denderah Tes-ark ("this from afar"). This bird is not
wounded like the Eagle (Aquila), but it is flying swiftly in mid-heaven. It is coming to the earth, for it is not so much a bird of the air, but a bird peculiarly belonging to both the earth and the waters.

In the heavens, the
stars of this constellation describe a perfect cross. At Christmas time, in the evening, it has rotated across the sky so it is standing on its base on the northwestern horizon, with the bright star Vega next to it.

Revelation 22:20: He who is the faithful witness to all these things says, “Yes, I am coming soon!” Amen! Come, Lord Jesus!

By His atoning death (as set forth in CAPRICORNUS), He has purchased and procured unspeakable blessings for His redeemed. This sign (AQUARIUS) tells of those blessings being poured forth, and of the speedy return of Him who is to bring "rivers of blessing," and to fill this earth with blessing and glory "as the waters cover the sea."

So far we have considered the divine message as revealed in twenty-four constellations, including six signs of the Zodiac. Briefly, it tells us:

‘A virgin shall bear a son called The Branch, he shall be much desired and shall come down. But he shall also be despised and rejected by men and shall be pierced. Man has been weighed in the balance and found wanting, but a price which covers will be paid by he who shall come down. There will be conflict between The Branch and the serpent, the scorpion and the dragon, all representing the forces of evil. The Branch will crush these forces and rescue mankind, and praise for him will rise up. The enemy, the forces of evil, will be destroyed. The redeemed of mankind will be saved and many blessings will be poured down’.