The twofold nature of the King The tenth zodiac constellation is Gemini, the Twins, with one usually being considered immortal and the other mortal - the Immortal One who comes at the Second Coming is the same as the mortal Son of Man who came at the First Coming. So, Gemini symbolizes the dual nature of the Messiah (that Jesus Christ is both fully God and fully human): Suffering Servant and Conquering King.

The Scriptures teach that Jesus was fully God while also being fully human. Paul declared in Colossians 2:9, For in Christ lives all the fullness of God in a human body. The word "incarnation" does not occur in the Bible. It is derived from the Latin in and caro (flesh), meaning clothed in flesh, the act of assuming flesh. Its only use in theology is in reference to that gracious, voluntary act of the Son of God in which He assumed a human body. In Christian doctrine the Incarnation, briefly stated, is that the Lord Jesus Christ, the eternal Son of God, became a man. It is one of the greatest events to occur in the history of the universe. It is without parallel.

John 1:1-2,14: In the beginning the Word already existed. The Word was with God, and the Word was God. He existed in the beginning with God. So the Word became human and made his home among us. He was full of unfailing love and faithfulness. And we have seen his glory, the glory of the Father’s one and only Son.

One bears in his right hand (in some pictures) a palm branch. Some pictures show a club; but both the club or bow are at rest! The other one holds a harp in one hand, and a bow and arrow in the other. They are at rest and in peace after victory won. This is what we see in this sign - Messiah's peaceful reign. All is rest and in peace. We see "His days," in which "the righteous shall flourish; and abundance of peace, so long as the moon endureth" (Psalm 72). But, for this blessed time to come, there must be no enemy!

Gemini is easy to find high overhead in mid-winter, above and to the left of Orion. The Romans called the twins Castor and Pollux, which are the names of the two brightest stars. These are the Latin equivalents of Hercules and Apollo from the Greeks.

Romans called the stars the "Twin Brethren" and associated them with the principle of brotherhood considered to lie at the foundation of their empire. In Egypt they became Horus the Elder and Horus the Younger. In Babylon they were the "Great Twins," and they were viewed as twins in Arabia as well. In China they were Yin and Yang, representing eternal dualism, the two halves of a circle, and contrasting principles of existence.

Mythology: In classical Greece the stars were named Castor and Pollux, legendary twins born of immortal Zeus and the mortal Leda, wife of the king of Sparta. Thus, Pollux was immortal and Castor mortal. They were brothers of beautiful Helen of Troy, for whom the Trojan War was fought. The Twins were known as well educated, strong and daring, yet gentle lads, who became healers, physicians and protectors of humankind. They were among Jason's crew of argonauts in quest of the Golden Fleece. On that voyage, a fierce storm threatened the mission, but abated as a pair of stars appeared over the heads of Castor and Pollux. Since that time seamen have called upon the brothers for protection from peril, and the eerie lightning phenomenon, sometimes called St. Elmo's Fire, has been thought of as the spirits of the twins playing in the sails, a good omen for sailors. Castor, a horseman, and Pollux, a boxer, fell in love with beautiful sisters who were already betrothed to suitors. The Twins challenged and slew their rivals, but Castor was mortally wounded. Overcome with grief, the immortal Pollux would have committed suicide in order to be with his brother, but this was impossible. In the end, Zeus placed both their immortal souls together in the sky as symbols of brotherly love, the precept they had so gallantly demonstrated throughout their lives on earth. Greeks and Romans invoked Gemini in storms and wars, leading to the expression "O Gemini," corrupted in later generations to become "By Jiminy" perverted to "Jiminy Cricket", a euphemism for "Jesus Christ", like "jeepers creepers" and so many others. Most people are totally unaware that they are blaspheming God with their exclamations.

The three decans are Lepus, Canis Major and Canis Minor

I. LEPUS (The Hare), The enemy trodden under foot 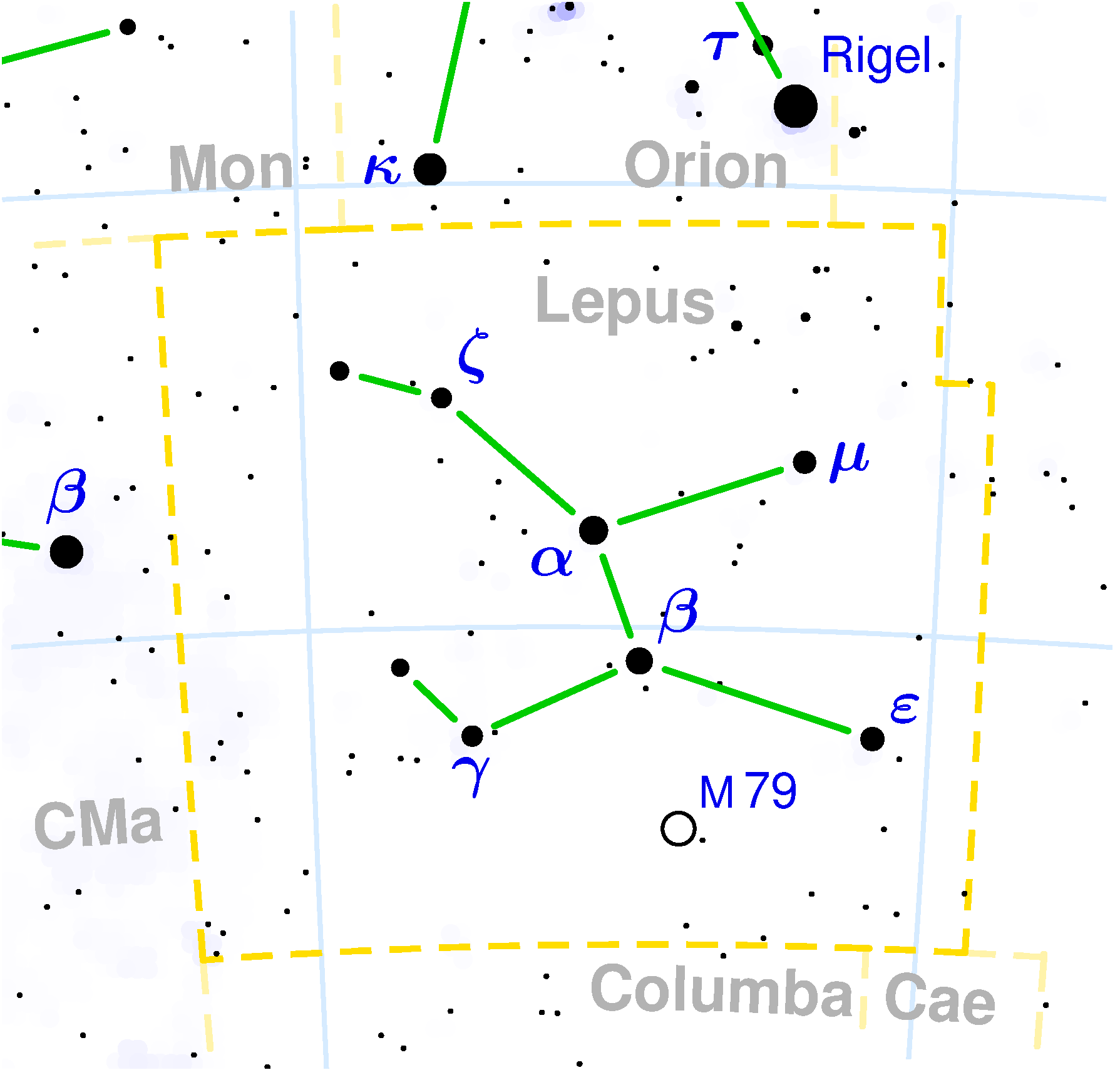 The first decan of Gemini is Lepus. The names of the three decans of Gemini, as well as the pictures, are all more or less modern, as is clear from the names being in Latin, and having no relation to the ancient names of their stars. To learn their real meaning, therefore, we must have recourse to the ancient Zodiacs. In the Persian planisphere the first decan was pictured by a serpent. In the Denderah (Egyptian) Zodiac it is an unclean bird standing on the serpent, which is under the feet of Orion. Its name there is given as Bashti-beki. Bashti means confounded, and Beki means failing.

It is shown under the foot of Orion (the foot that contains the star Rigel "The Foot That Crushes"), as if being crushed even as the various other dragons, serpents, and scorpions. Thus, it is identified with evil and with the enemy. The Persians showed it as a serpent, and the Egyptians showed Orion (Osiris) standing on a serpent with a bird on the serpent's back. But to the Greeks, this was the Hare which the Hunter is pursuing.

There can be no mistaking the voice of this united testimony. For this enemy is under the down-coming foot of Orion, and it tells that when the true Orion, "the Sun of Righteousness, shall arise," and "the true light" shall shine over all the earth, He "shall tread down the wicked" (Malachi 4), and every enemy will be subdued under His feet. Hence we have Satan defeated.

Greek Mythology: Lepus is an ancient constellation found under the feet of Orion, the Hunter. The creature is associated with the Moon in mythology. Some say that the dark regions on the surface of the Moon are a rabbit, originally Lepus. The rabbit was the favorite prey of Orion and his hunting dogs. The Arabs saw it as the "throne of the central one" (Orion).

II. CANIS MAJOR (The Dog), or SIRIUS (The Prince) - The coming glorious Prince of Princes (Sirius) 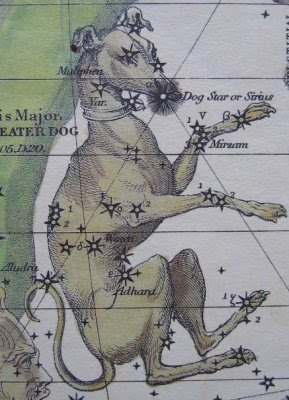 The next decan is Canis Major (Sirius)

Greek Mythology: Canis Major, the largest of Orion's two hunting dogs, might be chasing Lepus, the Rabbit, who is just in front of him. Or perhaps he is ready to help Orion battle the great bull. 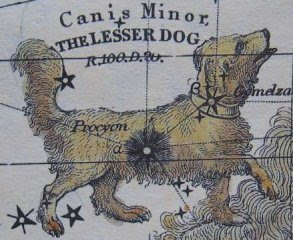 The last decan is Canis Minor

Are not the Big and Little Dog the same as the two Twins, indicating that one twin is the Little Dog who represents the Savior at the First Coming (in meekness), whereas the Big Dog (a brilliant constellation) is the Savior at the Second Coming, when he comes in power to destroy the enemy? The two dogs correlate well to the two twins.

This does, indeed, complete and perfect the presentation of this chapter: Messiah's reign as Prince of Peace; the enemy trodden under foot by the glorious "Prince of princes," who is none other than the glorified Redeemer.