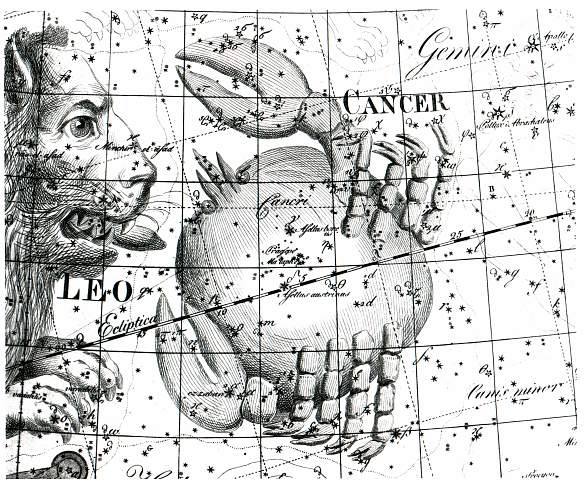 The three decans are Ursa Major, Ursa Minor and Argo

I. Ursa Minor - The lesser sheepfold, close to and including the Pole.

II. Ursa Major - The fold and the flock, anciently the Greater Sheepfold, in connection with Arcturus, the guardian and keeper of the flock Greek Mythology: Zeus lusts after a young woman named Callisto, a nymph of Artemis. Hera (Juno), Zeus's wife, turns Callisto into a bear because of her jealousy. Callisto, while in bear form later encounters her son Arcas. Arcas almost shoots the bear, but to avert the tragedy, Zeus sweeps them both into the sky, forming Ursa Major.

III. Argo - The pilgrim's arrival at home, the Ship, the company of travelers under the bright Canopus, their Prince, the Argonauts returned with the Golden Fleece.

So what do all of these decans have in common, and how do they help explain the meaning of the crab? In Cancer, the true picture is of the safety of the Shepherd's Fold which hides the multitude of lambs. We have the Lesser Fold, the assembly of the redeemed, harboring those who partook in the heavenly calling, who awaited a heavenly city ("Ursa Minor"); it circles round the heavens' center, which is no longer the hold of the Dragon but now the stronghold of the little flock. Again, we find the Seven Stars (cf. Revelation 1:16,20), the appointed sheepfold of the latter flock, purchased, separated out, numbered and guarded ("Ursa Major"). Finally, we find the two folds again represented in the two decks of that Ark which plows the seas, filled with riches and freemen (Argo). It seems reasonable to identify the Little Flock with redeemed Israel, and the Greater Fold with the Church and its redeemed Gentiles.